Proud of my rookie mistake.

summary: I  have a couple pneumatically actuated work holding fixtures and I wanted a clean solution to pressurizing & depressurizing them.  I was getting by connecting & disconnecting compressed air lines on the 1st fixture, but the 2nd fixture is meant to be controlled by the CNC, so manually connecting & disconnecting air lines would not work.  This was new territory to me so I made a rookie mistakes along the way, and the education that came from my mistake is more valuable than the cost of the mistake. 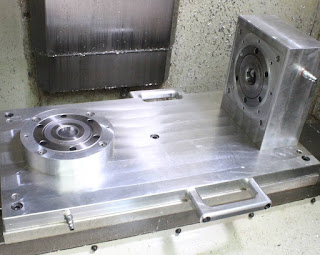 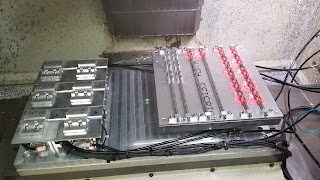 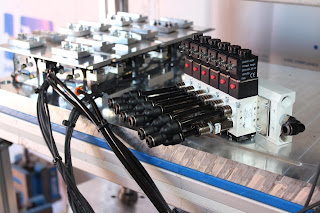 the long story:
I'm going to start using a pneumatic vise on my CNC mill because I can control the opening & closing of the vise with the CNC control for automated part loading & unloading. I'll also load/unload by hand sometimes, so I want to control the vise with a toggle switch too. Here's my final circuit design, & the earlier bad designs that lead to the good one.
I just realized a much simpler way of doing this, it seems so simple – duh I should've done it this way to begin with. Here's my defense as to why I didn't think of this sooner, & why I intend to make more of these “mistakes”
5/5/19 sketched, identified possible back flow leak problem, guessed check valves would solve.
6/12/19 realized check valve problem. 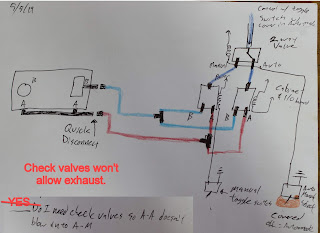 When switched to manual you need a way to stop air on the A side from exhausting thru the auto valve & vise versa. Check valve on Auto A would stop the exhausting & solve all your problems for manual use, but then auto would never release.
4 ball valves (one at each A or B port shown above) instead of check valves would solve it – you'd have to close 2 & open the other 2 by hand anytime you change over. Drawback – non-technical people will have trouble opening & closing the right ones. You could use an electromechanical version of the ball valves & wire them together with the auto/manual 5/2 – A & B for auto would use normally open & A & B for manual would be normally closed. That's 4 more 3/2 valves ~ $200 :-\ (I hadn't yet found the $20 source.) If the Ts had a gate in them that would close off 1 inlet port or the other (outlet always stayed open) that would solve it all very nicely. Investigate the gate valve T, if there's not a passive version, maybe there's an electro version, or at least a hand powered version. If you can't find that or if it's too $$ just get 4 ball valves – it's cheaper than 1 3/2. (Still want to find that T, could be useful for future stuff)
6/19/19 - Redesign traded 5/2 valves with pairs of 3/2 valves, 1 normally open (N.O.) & 1 normally closed (N.C.) 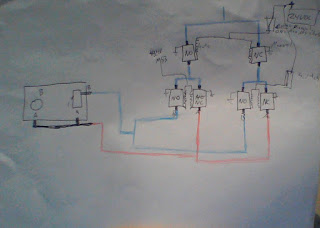 6/24/19 - Found a great N.C. valve, but no corresponding N.O. equivalent.  Tech support suggested using a 5/2 valve from the same series & plugging the N.C. port:
It seems like a little thing, but the guy I talked to is a pro for listening to what I was looking for and for going beyond just that & understanding what I wanted to do & (I always try to talk about what I'm trying to accomplish, not just what I'm looking for to keep the support guy's mind open to solutions that I haven't thought of, not just Y / N answers on do you sell this, will this work.  I ask open ended questions like "What will work?'  or "This is my objective, how should I get there?"
It doesn't always work, lots of people in technical support jobs don't know anything more than the script  don't know what they don't know because they don't think about it after they clock out.  They tell you customer service is important because they can't show you.

6/29/19 - Once I'd tested the design, saw it work, & ordered the parts that cleared up bandwidth to realize I was doing it all wrong.  The solution is as simple as this:

1. I don't design electrical or pneumatic circuits...at least up until 2 months ago I didn't.
I took a couple electrical classes in my engineering degree, but I didn't learn anything. I would say they were a complete waste of time because at the end of them I couldn't achieve what I wanted to be able to going in – my goals for the classes. Both classes I'm thinking of I did not objectively pass the final, but because none of the rest of the class did either an F got transformed to a C for all of us. Anyways maybe I'm being too tough on myself, maybe what I expected from the class was unrealistically high & I feel like the classes were failures based on that, when a re-calibrated look sees something different. Compared to zero I did learn something. In the electrical engineering class I learned Ohms law: V=I*R. In the automotive electrical class I learned about series & parallel circuits. If make a list of all my knowledge related to electrical stuff I might come up with a few more principles that I picked up in the classroom, probably not too many more. However the things I've remembered so far are foundational, building block sorts of knowledge, so maybe any other stuff that builds upon it owes thanks to the classroom, in that case it was better than a waste of time. Maybe just a really inefficient use of time. Not a loss, but a really really low return on my investment.
2. My 3 “mistake” designs didn't cost much – I'm out a small amount of thinking time + a small amount of $ on parts, but I'm at a good solution & can move forward now & that's more valuable than what I spent. The time & $ costs were a very affordable education, here's why I needed the education:

-  Never designed a circuit with a relay in it Never even installed a relay in an existing circuit
I've replaced starters on engines, & they've got a starter solenoid which is the same as a relay – electricity thru a coil creates a magnetic field which closes a switch “contacts” which connects to other points...actually what is the difference between a relay & a solenoid...(a search engine & 5 minutes later) essentially the same, “solenoid” moves a rod, “relay” closes a switch, & there's another devise I didn't know I didn't know, a “contactor”.
-  Connecting compressed air to an air ratchet was about the extent of my experience with pneumatics before this, I did know the proper term for pneumatics though. Nothing with “pneumatic actuation”, but I knew that term too.
-  Didn't know what components I needed
-  Didn't know the companies in the industry.
-  I won't say I was starting at zero, I knew what I wanted to do, and had an idea of how I could achieve it so I could ask good questions & move forward from there.

It's good to make a list of what I learned, not to puff things up to more impressive than they really are, but knowing that the Devil's in the details, it's good to list everything I got thru to get satisfaction from the accomplishment, & to gain confidence for the next project, to realize I can do it, just break the problem down & work on it a step at a time. It's easy to appreciate the importance of a single detail when it holds up an entire project. It's important to also appreciate the importance of a single detail that I check off the to do list when everything has gone smoothly.  An error does not become a mistake until you refuse to correct it.
Posted by Matt